The School for Designing a Society began as a project of former students of a class taught at UIUC in the 1980s by Marianne Brün, and members of the Performers’ Workshop Ensemble, an interdisciplinary touring group that had formed with composer Herbert Brün.

It was not a hopeful time: repression, regression, recession, pollution, Apartheid, epidemics, secret wars, the Drug War, joblessness, and homelessness loomed locally and around the world. 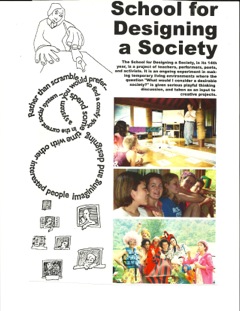 The idea of the school project was to enhance the usual ways people became politically active–getting involved in single-issue social justice campaigns–by creating a place where people would feel invited to dream, discuss, and act on images of a not-yet-existing society, a society in which today’s problems would be transformed.

This process would take inspiration from the arts and other visionary projects.

During the discussions of the school project, the Performers’ Workshop Ensemble was asked to host a conference, and we chose “Our Utopianists’ Audacious Constructions” as the theme. Among the presenters was Dr. Patch Adams, who had a plan to transform health care with a free, silly model hospital based on fun and friendship.

At this first meeting, we immediately sensed that our projects were sisters.

A few years later, the carriers of the school project were feeling stuck as to how to proceed. A summer school seemed the most feasible starting point, but where? It so happened that one member of the school group decided to go and visit the site of Patch’s future friendly hospital in West Virginia, and in two more trips that summer, brought one more and then a whole caravan of Illinoisans to the Gesundheit land.

Something about the romance of seeing a new landscape, meeting another group with a dream project, and traveling 800 miles from home led to the idea that this was where we would hold our first summer school.

The two intensive month-long sessions we offered that summer involved forty people, ranging in age from 11 to 72, 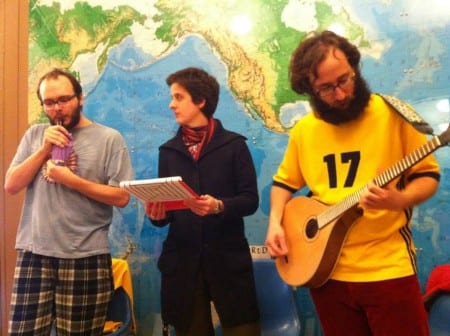 in a collaborative process of designing classes and projects based on the desires of the participants. It was exhausting and bewildering, but also delightful and encouraging, so we decided to continue the project. For the next several years, SDAS offered various versions of its summer school in Atlanta, Sioux Falls, and rural Wisconsin.

By 1997 we felt ready to expand to a two-semester format in our home town of Urbana. We rescued a little house on the brink of demolition and made it a hub of all sorts of experiments. We tried living labs, urban gardening, collaborative publication, anti-war cross-walk theater, no-failure micro-art, design charrettes, care clubs, citizen journalism, city council poetry, radio documentaries. The whole school made trips to New Orleans for a prison abolition conference, to Seattle for the WTO protests, to Harrisonburg for a health care system design intensive. We brought our desire & design curriculum to The Evergreen State College and Tuscany, Italy. And in 2004 we resumed holding summer sessions at Gesundheit, while continuing to offer courses and create performances in Illinois in the fall and spring.

Stay Connected with The School
for Designing a Society!