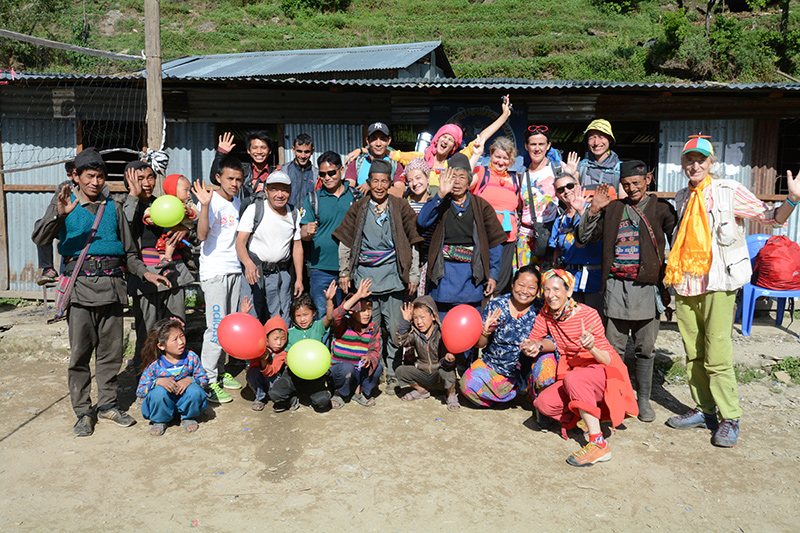 The first stop will be in Kathmandu, where we will stay at a B&B facility which is also a social inclusion project for young people from rural areas. Then we plan to visit the mountain villages for a few days, where we will help to reconstruct a school for 200 children that was demolished after the 2015 earthquakes with our partner organization Asia Onlus and with help also from the Gesundheit! Institute, Maria’s Children and other private donors. We will walk in the mountains and sleep in tents for part of our tour and meet with children in their schools, and also with the local shamans.

While in Kathmandu, we will also visit “Casa Nepal”, the house where our other partner organization, Apeiron Onlus, helps girls and young woman who are victims of domestic violence and trafficking. In 2006, Clown One Italia together with Apeiron started an educational project, called the “Kumari project” that gave an opportunity to 10 girls that came from very difficult families and upbringings, access to 10 years of schooling.

Since 2012 we have been promoting the “Sky Walker Clown” project that has made several humanitarian journeys with clowns, doctors, a herbalist, & a videographer. We visit different villages in the Rasuwa region to create a bridge of solidarity and cross-cultural exchanges with one of the oldest populations of Nepal – the “Tamang”.

The populations of the Rasuwa region, near the epicenter of the tragic earthquake of April 2015, are also the natural guardians of oases of wild nature and sacred temples of our planet: the highest mountains on earth, forests, glaciers and Himalayan rivers.

They are also heirs of an ancient culture of friendship and communion with the earth and all its creatures. Which preserves master shamans, artists and peasant heroes who have survived for thousands of years, with courage and skill, in extreme environments. This is also why it is our honor to help them. The earthquake has severely damaged many villages in this region.

In 2015 Clown One Italia onlus, in collaboration with Asia onlus, the Gesundheit! Institute, Maria’s Childrens and other donors have raised funds to help build a school at the Yarsa village, in Rasuwa region. Here is the video of the schools below.